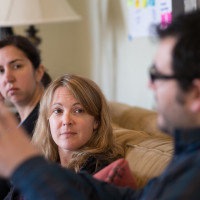 By Bruce on February 15, 2015 in Learning/Education

When you meet someone for the first time (or you’re spending time with someone) what’s your goal? What do you hope to accomplish? What do you want to get out of the interaction and conversation you have with them?

Now, in general, most people don’t think very intentionally about this question, which is a huge mistake because if you’re not clear on what you want to accomplish, chances are you’ll never hit the goal you would have wanted to hit if you’d thought about it.

But, even when you are clear on what your goal is, chances are you might have a widely divergent set of goals based on the person and the circumstance. For example, your goal could be

However, there is one goal that I would highly encourage you to consider making a part of virtually every relational encounter you have—and that is the goal of learning from the other person.

If you’d like to do that, you’ll want to follow and practice the next four ideas on a daily basis.

I. Believe That, “Everyone Knows Something Better Than I Do”

No matter, what you’re really good at, no matter how much you know, no matter where you went to school, no matter who you know—you can’t know everything. The vast amount of knowledge present on planet earth right now is mind-boggling (and it’ll only get worse).

Because no one can master it all, everyone finds little pockets of information that they find interesting (usually related to a passion or interest area) and they master that small area.

Once you own this belief, you’ll find that it changes your encounters with people because you’ll start asking questions of that individual to find those little pockets. However, you’ll never do that if you don’t start with the belief that, “Everyone knows something better than I do.”

As a voracious learner who spends most of his “free time” reading and taking courses (yes, even on a Friday evening at 10:00 p.m.) I know a fair amount about a lot of things—but I still enter virtually every conversation thinking that the person I’m talking with knows something I don’t and, of that, I want to learn from him or her.

II. Be Utterly Fascinated By People

People are fascinating. Everyone has a story—and no two stories are the same because no two people have the same exact experiences (not even twins who grew up in the same home and went to the same school).

The diversity of humanity is simply fascinating with its endless possibilities.

So, are you fascinated by other people and their stories?

III. Stop Thinking About You When You’re With Other People

Let’s play this out. Let’s say you just met Sally. If you’re acting like most people, you’ll be looking for opportunities to tell Sally about you and your life, what you’re up to, what’s going on in your life, what you’re working on, etc. Once you’re done telling your story, you’re basically done. Having interacted with people for over five decades now, I can easily attest that this is the normal conversation pattern for most people.

So, when you’re with other people, do you tend to think about you and what you want to say or them and what their genius might be?

IV. Own That You Only Learn By Listening

By definition, if you’re talking, you can’t be learning. All you can share with others is what you’ve already learned or figured out. Learning takes place when you choose not to talk and then take in the ideas of others.

In other words, it’s only when you’re listening, that you can learn. Now, to be honest, it is possible to listen and not learn (i.e. you can let the sounds of another person’s voice “enter one ear and exit out the other.”)

Listening, truly listening, involves all four of the ideas I’m sharing with you in this Johnson Letter. It begins when you believe that the person you’re talking with knows something about something that you don’t. It continues with a pure fascination that you want to know this person and their story and what they’ve learned along the way.

And then, once those two items are taken care of, you’re now engaged in a conversation where you’re asking a significant number of Socratic questions to draw out of this utterly fascinating person some of the wisdom and knowledge they posses. And finally, as you’re doing that—not focusing on you, but on them—you’re listening to their answers and responses with intensity—trusting that you’ll hear at least a few things that will either be immediately employable or part of your long-term mental database.

If you want to be your best version of you, you have to use every available opportunity you can to learn—and not just from books and courses, but from people and experiences.

So, do you want to be the best you that you can possibly be? If so, make sure you follow these four key ideas on a daily basis.

If you make it your goal when you’re with people to ask more questions and to listen to their answers than to talk about you and what you know, you’ll be amazed at how much the world becomes your classroom—and you become a better version of you!

P.S. Note: I didn’t title this, “You Never Learn When You’re Talking,” because you could be engaged in a conversation with someone (or a group of someones) about something and in the debate and discussion that ensue may come to a new understanding. But, I trust you get the gist of this lesson that the vast majority of your learning comes when you’re engaged in listening, not talking.

P.P.S. You’ll know you really own this lesson, when other people start remarking how interesting you are—and you know you didn’t say much at all about yourself :-)

Never Be Defensive. It’s Not to Your Benefit.
Dream Big Because Your Ambition is the Glass Ceiling On Your Potential