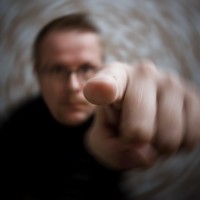 Never Be Defensive. It’s Not to Your Benefit.

By Bruce on February 7, 2015 in Attitudes, Conflict and Negotiation, Relationships

It’s a fact of life. Sooner or later, someone is going to accuse you of something, or confront you about an issue, or say something mean that’s intended to hurt you, or make an unflattering comment about you. And when they do, your natural instinct will be (and this is true of all of us)  to retaliate and be defensive—which is exactly why you have to fight those urges and do the opposite—if you want to succeed well.

Very few people ever learn this lesson, but if you will, you’ll discover that it’s invaluable. In fact, just to give you a glimpse into why this skill is so valuable to learn, here are four reasons why you’ll want to make the non-defensive choice when someone says something accusatory or inappropriate.

1. You never want to let anyone else control you

2. There may be some truth in what they’re saying

Whenever you choose to be defensive, you immediately stop listening and start defending yourself and your actions—and that’s a problem.  Even if someone has a bad motive for saying what they’re saying, that doesn’t mean there might not be something truthful in their comments. If you’re too busy defending yourself, you can’t hear that—which means you’ll end up missing a great opportunity for growth.

Even in my darkest moments, when people have done and said unbelievably cruel and untruthful things, I’ve often learned a lot about me and how I can become a better person. What others may intend for evil, God often uses for good. So, don’t stop listening just to defend yourself.

Solomon got it right, years ago, when he said, “A fool gives full vent to his anger, but a wise man keeps himself under control.” Proverbs 29:11. Whenever you get defensive, you allow your anger to blind you—which then usually leads to conflict and words poorly spoken (because they haven’t been thought through), which then makes you the person in the wrong. Don’t be foolish. Keep yourself under control no matter what anyone says.

4. Being in control is an act of maturity and wisdom

Whenever you or I encounter someone who is unruffled by the comments or accusations of others, we instinctively think, “Now there’s someone who’s mature.” And isn’t that what you want people to say about you?

I know that what I’m sharing is difficult. Wanting to defend yourself is natural. But then again, maturity isn’t about doing what feels natural. It’s about doing what’s right. One of my favorite passages from Solomon comes from Proverbs 9:8-9

Learning to not be defensive and to listen to what someone is saying (even if their motives are wrong) is what wise people do. If we get defensive, we never get to that point.

So, what should you do? Here are a few thoughts.

1. Refuse to lash back

This forces you to listen. “So, you feel ________ because of ________.” The first blank is for the emotion (angry, hurt, frustrated, etc.) and the second if the action/behavior. “So, you feel angry because I didn’t show up on time again.” This works in all situations—at work, with a spouse, with friends, with children, etc. You’ll be amazed at how fast this can “cool” people off.

When people are upset, they rarely think logically. So, they’ll often throw things at you that are illogical and downright ridiculous. For example, someone could say to you, in response to a grammatical error, “You’re the stupidest person I’ve ever met. How did you ever graduate from college?”

Rather than get defensive, in a calm and collected manner, you should ask a clarifying question like the following. “So, let me see if I’m hearing you correctly. You believe that because I forgot one comma and missed correcting ‘their” when it should have been ‘there,’ that I’m the stupidest person you’ve ever met and that my alma mater made a grave mistake by granting me a diploma when they should have flunked me. Is that correct?”

4. Remember that who you are and what you do are two separate things

When people are upset, they often confuse the two and translate someone’s actions into an indictment about the other person’s character. In the example above, someone took a grammatical mistake and turned it into a character issue (“you’re stupid”).

I’ll write an entire lesson about this issue because it’s so important, but for now, just remember that when people make accusations about you and your character, they’re usually jumping from an action to a character statement—and that’s rarely accurate. An action is simply that, an action.

5. Make being in control of your emotions one of your life goals

One of the affirmations I regularly repeat to myself is, “I will be in control of my emotions, decisions, actions and thoughts—and will not give the power of these over to anyone or anything else.” None of us can control those who will say cruel or difficult things to us. However, we can control ourselves. So, make that your goal. And one of the best tests of whether or not you actually own that goal will be how well you respond when someone attacks or accuses or confronts you about something that you don’t believe is justified.

6. Force yourself to ask if there’s any truth in their statements

This is the hardest one of all, but whenever someone confronts you about something or accuses you of something, you need to force yourself to ask the key question, “Is there any kernel of truth in what they’re saying that I need to hear?” Sometimes there isn’t. But frequently there is. So, don’t be defensive. Instead use their moment of accusation as a moment for you to consider if that might be an opportunity for you to use for your own personal growth.

Now, having said all that, you may be wondering, “Well, is it ever okay to defend myself?” Absolutely. But not in the heat of the moment. Being defensive and defending yourself are two completely different things. Defending yourself is about the truth and you should do that when you need to—but only when you’re calm and in control (and that usually requires some time and space between when the negative comments were made and your defense).

Learning how to not be defensive is a great life skill. Once you master it, using the six strategies above, you’ll realize how incredibly valuable a skill it is. And when you’re in control, you’ll end up having the kind of clarity of thought that you’ll need to defuse the situation and find a solution ten times faster than you would have if you’d given in to being defensive (plus you won’t end up saying something that you shouldn’t have that would have made the problem even worse).

Anyway you add it up, the absolute best strategy you can ever use when someone accuses you or confronts you of something is to never be defensive. It’s not to your benefit.

P.S. One last thought. The Apostle Peter had some great advice about how to deal with this issue, using Jesus as an example. In 1 Peter 2:23 he wrote

“When they hurled their insults at him, he did not retaliate; when he suffered, he made no threats. Instead he entrusted himself to him who judges justly.”

At the end of the day, it’s not your job to prove yourself to someone else. Instead, entrust yourself to your Heavenly Father and let Him right any wrongs on your behalf. He’s much better at that than you or I could or ever will be.

2 Responses to Never Be Defensive. It’s Not to Your Benefit.

Leave a Reply to Harry Click here to cancel reply.