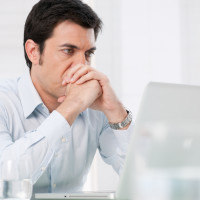 If At First You Don’t Succeed … You Modify

Well, if the answer to either of those questions is, “Yes,” don’t worry, you’re normal. We all do it. It’s called the “What if?” game

All those, “What if?” questions tend to make it difficult for you (or anyone) to move forward. And if you can’t move forward in freedom, chances are you’ll find it difficult to perform at your best.

So, what is it that makes this “What If?” game so debilitating? It’s a series of misbeliefs that lie underneath it.

I. The Misbeliefs That Drive “What If?” Fear

Behind every wrong behavior and/or emotion, there is a wrong belief behind it. In this case, there a couple of common misbeliefs behind the “What if?” game for most people. Here are the two I see most frequently.

1. The Belief That There is  Perfect Plan for Your Life

Whenever you catch yourself thinking, “What if I don’t get  _____” and assume that if you don’t, your life will be ruined or less than it could have been, you’ve allowed yourself to be sucked into this misbelief. There is no one perfect right plan for your life. Let that misbelief go. It will crush you.

There is no one right plan. God is not like that. So let go of that misbelief. You do not have to make every choice perfectly. No one does.

2. The Belief That Successful People Have a Perfect Record of Making the Right Choices

II. The Belief That’ll Get Rid of the “What If?” Fear

To help you understand the power of this belief, I want to share with you a story that explains how I learned it.

Back in the spring of 1989, I was getting ready to graduate from seminary, move to Germantown, MD and start a new church from scratch (no ongoing financial support, no core group, no building or place to meet, etc. … it was old school church planting). The style of church, at the time, was a cutting edge church style (seeker-driven) and it had an 80-90% failure rate at the time.

So, here I was, getting ready to move halfway across the country from Chicago, IL to Germantown, MD with just Jacquie and Chelsea (at the time a newborn) to start a new church with no real support system, using a model that had an 80-90% failure rate. To say that I was both excited and nervous at the same time would be an understatement.

Shortly before we left Chicago, Jacquie and I had dinner with a couple, Wes and Jan Anderson, from the church we attended. Wes was a very successful executive in his late 50’s or early 60’s at the time. The company he worked for supplied paint for Sears (if my memory serves me correctly).

We had just finished dinner. Jan and Jacquie had taken the dishes into the kitchen and Wes and I were standing next to the doorway between the dining room and the kitchen when the following conversation took place.

Wes: “So Bruce, are you getting excited about your new adventure?”

Me: “Overall, I think so but I’m also feeling pretty nervous. You know we don’t know anyone in Germantown. We don’t have a core group. We don’t have a place to meet. We don’t have ongoing financial support. We’re using a church model that has an 80-90% failure rate. So, in the back of my mind, I keep wondering, “What if it doesn’t work out? What if I fail?”

Wes: “Bruce, you have nothing to worry about. If at first you don’t succeed, you modify.”

I’ve never forgotten those words. In that one sentence, Wes completely changed my perspective and killed my fear. It became the phrase that got me through those first few years (trust me, I did a lot of modifying back then :-) and it’s been with me ever since.

III. The Real Scoop on Success

Success doesn’t happen in a straight line. No one goes from success to success to success. In fact, one of the future life lessons I’ll share with you (and one of my favorite sayings of all-time is) “No plan survives first encounter with the enemy.”

Life is about modifying. You take your best shot. You do your best. But there will always be more things out of your control than in your control, which means that most of your plans won’t work —and that’s okay. Why? Because you just modify.

What happens if you make a bad decision? You’ll use the same process (i.e. you’ll modify your plan based on the results of your bad decision).

What happens if something bad occurs outside your control? The same process (you’ll modify based on what happened).

One of my all-time favorite verses from the Bible comes from the book of Proverbs (Prov. 24:16)

“For though a righteous man falls seven times, he rises again.”

In other words, even a good man/woman makes mistakes. Notice, the text doesn’t say, “even a bad man falls seven times.” It says, “though a righteous man (someone who walks with God) falls seven times.” Everyone messes up (even good people). Everyone makes bad choices. The difference is that the person who walks with God doesn’t let it define them. They get back up, get in the game and then they modify.

So, rather than wasting you time or life procrastinating or worrying or being stressed over the “What ifs” I’d encourage you to adopt this belief/life lesson as one of your own, “If at first you don’t succeed, you modify!”

If you do, you’ll get farther faster and have a whole lot more fun in the process!

If Someone Somewhere Is Succeeding At What You’re Not, Own That You May Be the Problem
If You Want to Win More Arguments, Learn How to Logically Construct Them

Leave a Reply to Bruce Click here to cancel reply.