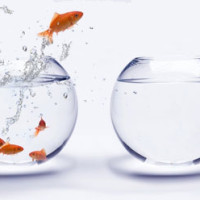 To Accomplish Anything Significant, You Have to Get Out of Your Comfort Zone

While most of us don’t like to admit this, we all prefer stasis (meaning, we prefer things to remain the same). It’s comfortable to remain as we are—especially when over 90% of what we do each day is done on auto-pilot. In other words, we all prefer to continue in our current habit patterns and routines because we all believe that they’re the best for us.

However, if you want to create any significant change in your life, you have to learn how to fight this natural gravitational pull of inertia that wants to keep you and your life the same. Why? Because if you don’t, you’ll never achieve anything significant. You’ll be forever captive to the gravitational pull of comfort and conformity. In other words, you’ll remain stuck.

I. This is True Of Every Area of Your Life

If you want to do anything significant or make a significant change in your life, you’re going to have to learn how to consistently break free from your own self-imposed comfort zones. This is true in every area of your life. For example,

1. If you want a better job, chances are you’ll have to leave the comfort of the job you’re in right now.

2. If you want to be better at the kind of work you do, you’ll have to leave the comfort of doing what you’re currently doing the way that you’re doing it and move to the uncomfortable place of doing your work in a new way—which will be uncomfortable until you master it.

3. If you want a raise, you’ll have to be willing to leave the comfortable place of letting your boss decide on your raise, and instead, ask him/her for a bigger raise.

4.  If you want a better physical body, you’ll have to leave the comfort of eating the foods you like (in the quantities you like), as well as the lack of a disciplined approach to personal training.

5. If you want to start a new ministry or non-profit, you’ll have to leave the comfort of your current one.

6. If you want to repair a broken relationship, you’ll have to leave the comfort of the status quo and risk the possibility of even more rejection.

7. If you want to learn a new skill or take up a hobby, you’ll have to choose to leave the comfort of what you know and be willing to feel like a fool for some period of time.

Unfortunately, most people aren’t willing to make these kinds of choices. They’re far more content to give in to gravitational pull of habit gravity, which is why so few people ever accomplish anything significant or make any significant changes in their lives. They simply aren’t willing to take the kinds of risk necessary to break out of their comfort zones in order to do something great.

I’ll never forget what one of my neighbors said back in the summer of 1989, shortly after Jacquie and I moved from Chicago, IL to Germantown, MD to start our church from scratch. I had just graduated from seminary a week earlier. Jacquie didn’t have a job yet. Chelsea was only four months old. We had no core group or even any contacts in Germantown. We had no ongoing means of support. And we had no place to meet for church.

After meeting me, Dale, one of our neighbors two doors down, said to her husband, “I think I just met one of the craziest people I’ve ever met. He and his wife, along with their four-month old child, moved here to start a church from scratch. They don’t have any people here. They don’t have a church supporting them. I think he must be crazy!”

And she was right. I was crazy. But those next fifteen years proved to be an incredible journey for our family as that church grew from two families to two-thousand people—which meant that thousands of people’s lives were impacted by that decision. Seneca Creek never would have existed if Jacquie and I weren’t willing to leave our comfort zones. Starting a new church in a town 700 miles away in a town we had just visited one time for a day—with no core group and no money—was definitely out of the comfort zone. But because we did, thousands of people’s lives are different.

If it were easy to do something great everyone would be doing it and then it wouldn’t be so great. It would just be normal. But most people won’t do what’s necessary to break out of their comfort zone, which makes it easier for you.

III. A Few More Thoughts On Breaking Out of Your Comfort Zone

If you’d like to develop a habit of breaking out of your comfort zone, here are a few habits to engage in and thoughts to reflect on.

So, as you go through life, make sure you regularly fight the gravitational pull of familiarity and comfort. Habit gravity is strong. However, virtually everything significant that you’ll ever want to accomplish (including “simple things” like getting an education, getting married, having a child, etc.), will be at the hands of doing something different where you’ll be forced to leave your comfort zone. Yes, it’ll be scary at times. And yes, it’ll often be difficult. But then again, the best things in life usually are.

Feel the fear. Take the risk. And break free from your comfort zones. You’ll be glad you did.

Dream Big Because Your Ambition is the Glass Ceiling On Your Potential
Life Is Lived Forward, Not Backward

2 Responses to To Accomplish Anything Significant, You Have to Get Out of Your Comfort Zone