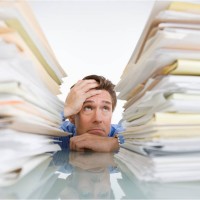 Do The Thing You Don’t Want to Do First

Virtually every day there’s at least one thing that looms over your head that you don’t want to do. And unfortunately, avoiding it doesn’t solve the problem (the tension is still there, the papers don’t move themselves, the pain still exists, etc.).

However, what’s frequently worse (and forgotten), is the amount of negative, psychic energy you waste by trying to put it off. For example, let’s say you know you need to have a difficult conversation with your spouse. Rather than having the conversation, you choose to put it off. What happens to your productivity for the rest of the day? Exactly, it’s hindered. Why? Because you’re thinking about (and dreading) having that conversation all day long (or days or weeks long). This is a total waste of emotional energy and productivity.

So, don’t waste your time and emotional energy avoiding doing something you don’t want to do. Do it first (or as soon as possible) and you’ll reap the benefits of having that thing in the past and not in your future.

Slow Is Better Than Fast In Dating
Forget Being On Time. Be Early!